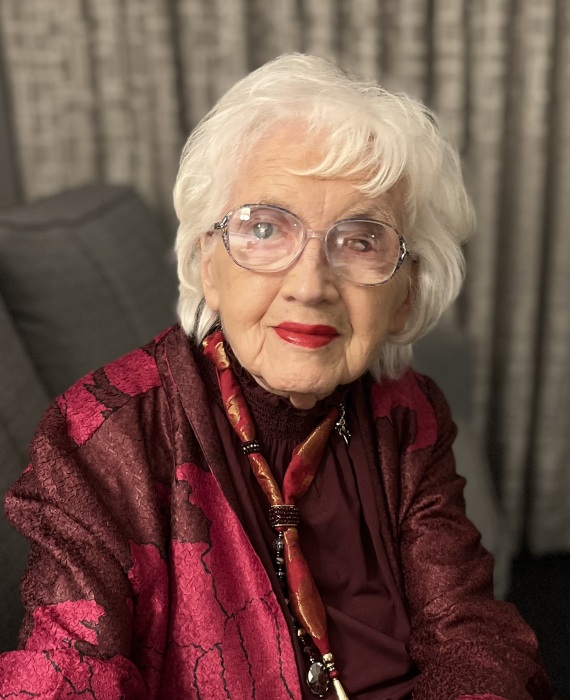 Jeanne Moore Cordts passed away peacefully at her home in Frostburg on October 18, 2022, at the age of 99 years and 10 months. In anticipation of a typically chilly fall and winter, Jeanne recently enjoyed a wonderful visit to the family farm in Cazenovia, New York. In Frostburg, Jeanne and the family arranged several small gatherings with friends to share appreciation for decades of friendship. Just the day before, she was busy sending out gifts of daffodil bulbs and family recipes and signing thank you notes. Jeanne had a true sense of purpose in her 100th year, and these activities and conversations became her “100th Year Celebration.” She felt the warmth of every visit, of every memory, of her home and beautiful garden surroundings, and of helpful hands.

Jeanne was born December 18, 1922, at home on Pompey Hollow Road near Cazenovia, New York. She was the first of five children of Walter Stedman Moore and Irene Dady Moore. Jeanne’s husband of 47 years, Harold Cordts, died in 2004.

Jeanne and Harold came to Frostburg in the fall of 1958 and immediately pursued community service endeavors. Harold chaired the Department of Health, Physical Education and Recreation at Frostburg State Teachers College, taught and coached. Jeanne taught at the College part-time, served as Editor of the Journal of the Alleghenies for 14 years, chaired the Frostburg Historic District Commission, was active in the American Association of University Women (AAUW), and served as president of the Frostburg Garden Club. Jeanne was named the State of Maryland Mother of the Year in 1988. Her mother Irene was recognized as the New York State Mother of the Year in 1960. Harold and Jeanne hosted many faculty picnics and dinners at their home in Frostburg over the years. She devoted herself to family and the community.

Jeanne’s father and mother farmed a hillside and fertile valley, growing apples, corn, favorite other vegetables and flowers, and operating a dairy for a time. From this humble beginning, Jeanne went on to study at Cazenovia Junior College, SUNY-Albany, and Syracuse University, earning Bachelor’s and Master’s degrees and pursuing a doctorate as well. Jeanne and Harold met as graduate assistants and doctoral candidates at Syracuse University in the fall of 1955. Harold grew up on the prairies of eastern South Dakota and had been an Army officer during the Korean War. Jeanne grew up in a farming valley, had been a college student during World War II, then a high school English and history teacher in upstate New York.

Jeanne and Harold were both fortunate in having received academic scholarships and other financial aid – support essential to advance their education. Prior to Harold’s death in 2004, they decided to fund a scholarship at Frostburg State University – it endures today. In addition, she initiated the Jeanne Moore Cordts Class of 1942 Academic Excellence Scholarship at Cazenovia College. This award reflects the generosity shown by Cazenovia College’s then President who enabled Jeanne to attend college after a hailstorm destroyed the family’s apple crop in 1940. Cazenovia College also held a dedication ceremony this year for The Jeanne Moore Cordts ’42 Study in Witherill Library, distinctive for the oil paintings by her brother Dr. Roger Moore. These scholarships were very important to Jeanne and Harold as a way to show gratitude for those who supported their education.

Jeanne had many interests, in particular family genealogy. "My first version of the family tree, handwritten on a 6-foot roll of heavy brown wrapping paper, I presented to my parents as a Christmas gift in 1953." The accuracy of this document was remarkable and, while replaced by computers and DNA today, chronicled her family tree and history of the Walter S. Moore Apple Farm. In 2014 Jeanne published the book "Windfalls: Stories in the History of the Moore Apple Farm of Upstate New York" that recounts a rare time in our history remembered by those living today from this era. Her love of gardening endured since childhood, manifest over decades by flowers on the guardrail posts and entrance to the Cordts’ driveway. These plants, particularly the petunias, were nurtured with loving care daily throughout the summer and fall, and a sight for passersby to behold. Her garden across the alley yielded corn, tomatoes, peppers, green beans, strawberries and abundant wildflowers over the years, with a bench and birdbaths - she enjoyed them immensely. There was no end to her love for selecting flowers each year (daffodils a favorite), planting the pots, watering, fertilizing… second only to her love for her family.

Jeanne kept a sound mind and welcoming home to her last day. Her family visited every weekend, and at other times a loving group of neighbors, friends and caregivers kept her busy and safe. While caring for elderly parents is not easy, Jeanne gave back far more than can ever be repaid. The Cordts family extends its deepest appreciation to all in her watchful group, whose meal preparing, TV watching, and reliability enabled Jeanne to stay right where she loved to be – at home making phone calls, relaxing in Harold’s chair, sitting at the kitchen table, playing the piano, or at her desk playing solitaire. They cared for Jeanne much like her children did.

Jeanne is survived by three siblings: Dr. Helen Breitbeck of Oswego, NY; Mr. Walter S. Moore, Jr., of Cazenovia, NY; Dr. Roger Moore of Clinton, NY; and sister-in-law Billie (Barbara) Moore of The Villages, FL. Her brother Mr. James Moore pre-deceased her and rests in peace in Cazenovia, along with her father and mother. She is also survived by her five children and their families: Dr. Paul Cordts and wife, Patricia, with step-grandchildren Michael, Katherine, John and Jessica; Mr. John Cordts and wife, Shailaja, with step-grandson Aditya and wife, Swati; Dr. Jerome Cordts and wife, Nerissa, with granddaughter Gemma; Mr. Thomas Cordts and wife, Tina; and Mrs. Anne (Cordts) Del Core and husband Gerald, with grandchildren Sophia, Luke and Juliet. Jeanne is survived by numerous nieces and nephews.

Friends will be received at the Sowers Funeral Home on Monday, October 24th from 9:00 to 10:30 a.m. with a Mass of Christian Burial to be held at the Divine Mercy Parish at St. Michael’s Church at 11:00 a.m. with Father Ed Hendricks as celebrant.

Interment will be at Frostburg Memorial Park.

In lieu of flowers, the family encourages donations to: Dr. Harold and Jeanne Cordts Scholarship at Frostburg State University or the Jeanne Moore Cordts ’42 for Academic Excellence Scholarship at Cazenovia College, Cazenovia, NY. Further, contributions in support of a memorial garden for Jeanne Cordts at Frostburg State University may be made payable to the FSU Foundation, 101 Braddock Road, Frostburg, MD 21532, or given online at www.frostburg.edu/makeagift.

To order memorial trees or send flowers to the family in memory of Jeanne Cordts, please visit our flower store.